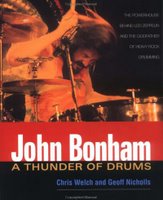 Led Zeppelin, one of the most popular and influential bands of all time, has always caught my music attentions with all of it's presence since I was a kid. The great silhouette of Jimmy Page, the guitarist & the producer, stands superiorly in front of the rest of the band members. With his experiences as a sessional guitar player in many bands, he had finally built his own music ambition through Led Zeppelin. No one will ever argue that he was the reason of its existence. On the other hand, Robert Plant (vocal), John Paul Jones (bass & keyboard) and the phenomenal John 'Bonzo' Bonham (drums), shared the same passion to build Jimmy's dream of the band. Yet, their great performances, somehow, never really grabbed my passion of the band as big as Page. And I was wrong.

The book I bought when I went vacation back to my hometown last week, had changed radically the way I see my all time favorite band, Led Zeppelin (as I felt ashamed to call my self as big fan of Zeppelin). "John Bonham: A Thunder Of Drums -The Powerhouse Behind Led Zeppelin and The Godfather of Heavy Rock Drumming" (Bahasa version: Kekuatan Mahadahsyat di Balik sebuah Supergrup).

I play guitar not drums, but the book had finally lighted me up to show the much bigger power behind the shadow of the guitar virtuoso. The drums technique, energy and passion he played in almost all Zeppelin songs (in some songs he was completely off) suddenly slapped my ears so strong, woke me up, seemed I'd been sleeping while listening them all this time. It was Bonham drums playing apparently that really made the sound of Zeppelin so damn heavy & dynamic as well. And yeah, actually I read about that opinion all the time in magazines, internet and all, but through the book I finally comprehend Bonham history, passion and life, even I could finally totally apprehend why the rest of the band did not continue to raise Zeppelin's flag since his death. Bonzo was unreplaceable by any drummers, even the most inherited drums playing character, his own son Jason.

He had a quite unique drumming style he took from other drummers techniques and blended with his own sensational character. He became the second most influenced drummers after his favorite drummer, Buddy Rich. Bonham did not invent anything, he just put his groovy feel, amazing chops, versatile skills, hard hitting power, and passion for the instruments to construct and fill elegantly Led Zeppelin songs.